Taxpayers who contribute to a retirement plan, like a 401(k) or an IRA, may be able to claim the Saver’s Credit. This credit can help a person save for retirement and reduce taxes at the same time.

Here are some key facts about the Retirement Savings Contributions Credit:

Nonrefundable Credit. The maximum contribution is $2,000 per person. Those filing a joint return can also contribute $2,000 for the spouse. However, the credit cannot be more than the amount of tax that a taxpayer would otherwise pay in taxes. This credit will not change the amount of refundable tax credits.

Scams continue to use the IRS as a lure. These tax scams take many different forms. The most common scams are phone calls and emails from thieves who pretend to be from the IRS. Scammers use the IRS name, logo or a fake website to try and steal money from taxpayers. Identity theft can also happen with these scams.

Taxpayers need to be wary of phone calls or automated messages from someone who claims to be from the IRS. Often these criminals will say the taxpayer owes money. They also demand payment right away. Other times scammers will lie to a taxpayer and say they are due a refund. The thieves ask for bank account information over the phone. The IRS warns taxpayers not to fall for these scams.

Below are several tips that will help filers avoid becoming a scam victim.

IRS employees will NOT:

If a taxpayer doesn’t owe or think they owe any tax, they should:

In most cases, an IRS phishing scam is an unsolicited, bogus email that claims to come from the IRS. Criminals often use fake refunds, phony tax bills or threats of an audit. Some emails link to sham websites that look real. The scammers’ goal is to lure victims to give up their personal and financial information. If they get what they’re after, they use it to steal a victim’s money and their identity.

For those taxpayers who get a ‘phishing’ email, the IRS offers this advice:

More information on how to report phishing or phone scams is available on IRS.gov.

Many people find it necessary to take out money early from their IRA or retirement plan. Doing so, however, can trigger an additional tax on top of income tax taxpayers may have to pay. Here are a few key points to know about taking an early distribution:
1. Early Withdrawals. An early withdrawal normally is taking cash out of a retirement plan before the taxpayer is 59½ years old.
2. Additional Tax. If a taxpayer took an early withdrawal from a plan last year, they must report it to the IRS. They may have to pay income tax on the amount taken out. If it was an early withdrawal, they may have to pay an additional 10 percent tax.
3. Nontaxable Withdrawals. The additional 10 percent tax does not apply to nontaxable withdrawals. These include withdrawals of contributions that taxpayers paid tax on before they put them into the plan. A rollover is a form of nontaxable withdrawal. A rollover occurs when people take cash or other assets from one plan and put the money in another plan. They normally have 60 days to complete a rollover to make it tax-free.
4. Check Exceptions. There are many exceptions to the additional 10 percent tax. Some of the rules for retirement plans are different from the rules for IRAs.
5. If someone took an early withdrawal last year, they may have to file Form 5329, Additional Taxes on Qualified Plans (Including IRAs) and Other Tax-Favored Accounts, with their federal tax return. Form 5329 has more details.
When taxpayers file their tax return, it’s important they use the right filing status because it can affect the amount of tax they owe for the year. It may even determine if they must file a tax return at all. Taxpayers should keep in mind that their marital status on Dec. 31 is their status for the whole year.
Sometimes more than one filing status may apply to taxpayers. When that happens, taxpayers should choose the one that allows them to pay the least amount of tax.
Here’s a list of the five filing statuses:
1. Single. Normally this status is for taxpayers who aren’t married, or who are divorced or legally separated under state law.
2. Married Filing Jointly. If taxpayers are married, they can file a joint tax return. If a spouse died in 2016, the widowed spouse can often file a joint return for that year.
3. Married Filing Separately. A married couple can choose to file two separate tax returns. This may benefit them if it results in less tax owed than if they file a joint tax return. Taxpayers may want to prepare their taxes both ways before they choose. They can also use this status if each wants to be responsible only for their own tax.
4. Head of Household. In most cases, this status applies to a taxpayer who is not married, but there are some special rules. For example, the taxpayer must have paid more than half the cost of keeping up a home for themselves and a qualifying person. Don’t choose this status by mistake. Be sure to check all the rules.
5. Qualifying Widow(er) with Dependent Child. This status may apply to a taxpayer if their spouse died during 2014 or 2015 and they have a dependent child. Other conditions also apply.
All taxpayers should keep a copy of their tax return. Beginning in 2017, taxpayers using a software product for the first time may need their Adjusted Gross Income (AGI) amount from their prior-year tax return to verify their identity.

People with disabilities are often concerned that a refund will impact their eligibility for one or more public benefits, including Social Security disability benefits, Medicaid and Food Stamps. Refunds, including refunds from tax credits such as the EITC, are not counted as income for purposes of determining eligibility for benefits. This applies to any federal program and any state or local program financed with federal funds.

As many as an estimated 1.5 million people with disabilities miss out on this credit because they fail to file a return, according to the IRS. Many of these non-filers fall below the income threshold requiring them to file, but the service urges them to consider filing anyway to possibly receive the EITC.

The IRS emphasized that Social Security benefits or SSDI do not count as earned income. Additionally, taxpayers may claim a child with a disability or a relative with a disability of any age to get the credit if the person meets all other EITC requirements.

The IRS’s EITC Assistant can help determine a taxpayer’s eligibility and estimate the credit.

Crooks have tried all sorts of e-mails scams, but almost everyone has figured out that the IRS does not send out notices by e-mail. So crooks have changed their tactics. Now, there are reports of taxpayers receiving by mail (or email) fake notices requiring immediate payment to a P.O. Box. The P.O. Boxes are located in cities where the IRS has service centers, but of course are not IRS P.O. Box addresses.

These scammers have duplicated the look of official IRS mail notices, which to the untrained eye would lead one to believe a notice was really from the IRS.

So be extremely cautious of any notice you may have received from the IRS. If a notice is demanding immediate payment and there has not been any prior contact by the IRS over the issue, then the notice is probably from a scammer. Reports indicate the initial letters were numbered CP-2000. 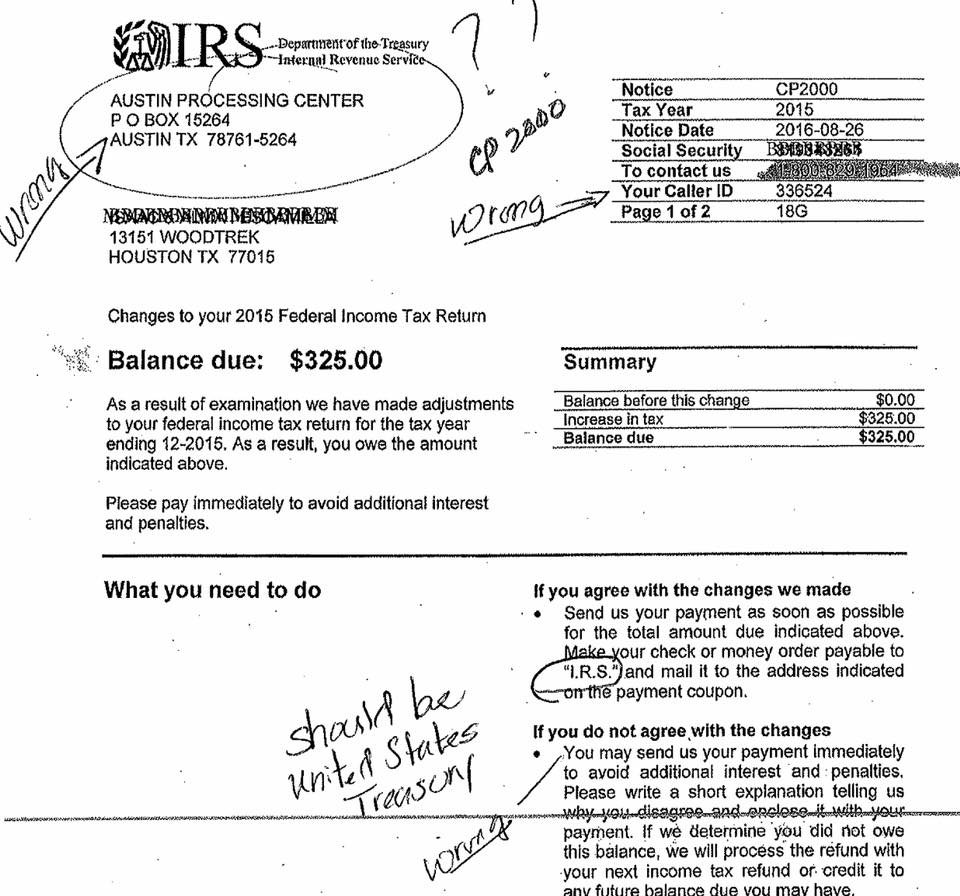 Don’t be a victim, have any notice you receive from the IRS, or any tax authority for that matter, reviewed by this office before taking action.

Via California Society of Enrolled Agents

MONTGOMERY, Ala. — More than a half million Alabamians could have their tax refunds delayed next year.

According to Al.com, many within the state could find themselves waiting until almost spring instead of the typical January time frame because of an IRS procedure change.

The IRS will hold tax refunds for filers claiming the Earned Income Tax Credit or the Additional Child Tax Credit until at least Feb. 15.

In 2014, about 507,000 Alabamians filed for ETC credits. Those in the state were a part of the 27.5 million people who filed for the same credits throughout the country.

In Alabama, the EITC average return amount was $2,784.

The IRS usually issues refunds with 21 days or less after processing begins on a return. The agency began accepting returns Jan. 19 this year.

Understanding your tax obligation is one key to business success. When you start a business, you need to know about income taxes, payroll taxes and much more. Here are five IRS tax tips that can help you get your business off to a good start:

If you client purchased 2016 health care coverage through the Health Insurance Marketplace, you may have chosen to have advance payments of the premium tax credit paid to the insurance company to lower the monthly premiums. If this is the case, it’s important to let the Marketplace know about significant life events, known as changes in circumstances.

Changes in circumstances that should be reported to the Marketplace include: